The SGR Deadline is Upon Us... 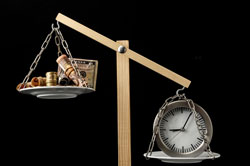 Repeal or patch- that is the question.

The sustainable growth rate formula has been a long debated issue for almost 20 years, and the source of a political tug-of-war that has yet to be won. Congress just can't seem to decide how much- or how little- doctors get paid through Medicare for patient treatment.

In 2014, the “SGR Repeal and Medicare Provider Payment Modernization Act” was introduced, and proposed to eliminate the SGR formula and establish a 0.5% annual rate increase to provide a more stable payment schedule. This act was rejected, and a deadline of March 31st, 2015 was given to either patch the SGR formula once again, or finally repeal it and establish a permanent solution.

Patches to the SGR formula have already driven up a bill close to $200 billion, and adopting the “Repeal and Modernization Act” first presented in 2014 would cost $174 billion over the span of 10 years. Freezing the rates for 10 years will cost just under $137.5 billion.

While it is clear both sides of the aisle realize a more permanent solution is necessary, political differences could continue to put a halt on real progress. Time is running out with less than two weeks to come to a decision while the senior health care industry hangs in the balance- with all eyes watching to see where the weight will fall.