Medicare Privatization: The Who, What, How & Why 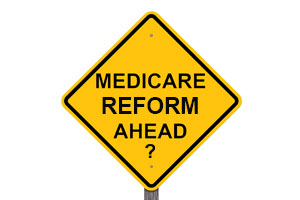 Shortly after Donald Trump became the President Elect, a flurry of speculation and concern over the future of Medicare has abounded.  Throughout Trump's campaign he advised that he has no plans to change the Medicare program, and Vice President Elect Mike Pence has since reinforced those statements; however, Trump's cabinet selection, the development of the Congressional republican majority, and a statement added to his transition website about "modernizing Medicare" have politicians and industry insiders wondering if there is more to the story.  So what are the facts?

Paul Ryan, Speaker of the House of Representatives, has been pushing to privatize Medicare by making it a "premium support" system for years.  Tom Price, Georgia Representative and Republican chairman of the House Budget Committee, has been selected by Trump to become the Secretary of Health and Human Services and is a supporter of Paul Ryan's Medicare privatization overhaul.

Ryan proposes that the current Medicare structure is not financially sustainable to continue providing the same benefits at the same levels moving into the future, and has constructed a privatization plan by means of premium support to offer an alternative to funding the Medicare program.  Opposers of the plan state that taking blanket benefits away from all seniors will compromise health care options, lead to price hikes, and possibly the death of traditional Medicare which has been a promise to those paying in to the system their working lives.  Congressional democrats have voiced their staunch intentions to fight the privatization of Medicare.

Ryan and Price's positions in office, their united positions on Medicare reform, and republican majorities in the House and the Senate make Medicare reform more of a real possibility than it has ever been.  While Trump and Pence have denounced reform, concerns are arising that they will be influenced differently as the administration transitions and begins legislating; however, it is important to remember that even if all of the Medicare reform stars align it could take years to make any real changes to the program.  As with all bills presented, they are picked apart piece by piece with some parts being kept, others left out, and amendments being made along the way so what is originally presented would most likely not be what is enacted.

What is premium support and how would it work according to Ryan's suggestions?

Much is unknown about how a premium support system may hammer out in the long run, but these are some basic facts to get an idea of the who, what, why, and how of the possible Medicare reform buzz.