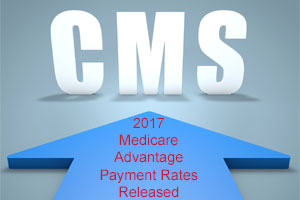 Monday, April 4th.  The rates were only raised an average of 0.85% instead of the projected 1.35%, but after a coding trend is added to the base rate factors of 2.2% the expected average change in revenue is raised to 3.05%.

These rates are a base average and payments to different companies can vary due to their eligibility for quality bonuses that rely on several different factors such as star ratings, premiums, and enrollee health.

For a detailed breakdown of the rate adjustments see the CMS General Fact Sheet or view The 2017 Rate Announcement and Call Letter.